Sam Cheung is a pro-democracy district councillor in Tuen Mun, a suburb of Hong Kong, where he lives with his wife and relatives. He feels deeply for his community and works hard for it every day. However, he faces repression from the government.

Sam didn’t hesitate. After we contacted him on Telegram and confirmed our identity by sending him an email from work, he immediately agreed to join the “Hong Kong Diaries”. On Monday, the 28th of September, the project begins. Sam is a District Counsellor in Tuen Mun, elected on the ticket of the pro-democratic “Tuen Mun Community Network”. He wanted to run in the election for the Legislative Council (Hong Kong’s highest parliament) in September, but the election has been postponed until 2021 – according to official statements because of the corona pandemic.

Hey Sam, how is your day going?

So how soon do you think you will get the money?

I used to get my money back within two weeks before. However this time, I have no idea how long it will take. I have waited for a month already. It won’t surprise me if it takes one more month and then they finally officially reject my application, for any reason they come up with *

The 28th of September is not a normal day in Hong Kong. Today, six years ago, the Umbrella MovementThe umbrella protests took place in Hong Kong from September to mid-December 2014. The protests were triggered by a decision of the Chinese People’s Congress to select the candidates for the Hong Kong administrative chief post through a preliminary selection process. The movement got its name because the protesters used umbrellas to protect themselves from the tear gas used by the police. demonstrations started.

Today is the anniversary of the Umbrella Movement. Can you remember what you did on this day 6 years ago? What does the pro-democratic movement mean for you today?

Today once I got up in the morning and I saw many, many people repost what happened on that day six years ago, for example Joshua Wong or other friends who were enthusiastically involved in the social movement. Most of them remember on that day, they were on the street protesting.

How was it for you?

But for me it was a little bit different, because I was not in Hong Kong, I was in Austria, because I was having an exchange program, so I didn’t experience the whole movement in person, but was watching it on Youtube.

What does the movement mean for you today?

So today, in 2020, social movement is more like a journey for me to search for my identity, because I felt a little bit lacking in my identity as a Hongkonger, because I was not there. I was absent from a huge and remarkable event in Hong Kong’s history.

So I felt a bit lost for the last five years until last year, when I found that it may be another equally remarkable event may happen. So I asked no questions and engaged in the movement and joined in an election later then, the primary elections**

* This message was originally sent to us on the 29th of September. It has been transcribed and edited for clarity where necessary.

** This message was originally sent to us as a video. It has been transcribed and edited for clarity where necessary.

Sam and his colleagues from the pro-democratic camp are outspoken critics of the Chinese Communist Party. This makes them people of interest for the Hong Kong government.

He’s the politician who was sentenced to jail because he tried to enter the Legislative Council, right?

Yes… he supported me during the primaries

In 2016, Baggio Leung (at that time 30 years old) refused to take a proper oath of office when he was about to be sworn in as a member of the Legislative Council, Hong Kong’s highest parliament. Instead of swearing allegiance to the “People’s Republic of China” he swore on the “People’s Refucking of Cheena”, using a racist Japanese slur for Chinese people. After he was barred from office for his protest he tried to barge into an assembly of the Legislative Council. Shortly afterwards Leung was indicted for unlawful assembly and sentenced to four weeks in prison in September 2020. His actions secured Baggio Leung a spot on the radar of the procommunist government.

I’m uploading the clips I have today… You will see that in one of the clips I said nothing. This is because I was filming some guys behind me. They were plainclothes policemen and they followed us until I left by taking a car.

Wow, is that the first time this happened to you?

The first time being followed was within the primaries election period

When I went to a meeting

Do you think Baggio will be under constant surveillance?

It’s good to see Baggio back, but it also worries me that some plainclothes officers where following him right after he got released. It is what we Hong Kong people or protesters are facing nowadays. The plainclothes policemen are nowhere and everywhere, just like the pressure from the state apparatus *

* This material was originally sent to us as a video. It has been transcribed and edited for clarity where necessary.

Before the project started, Sam told us that the first thing he thinks about after getting up in the morning is politics. Since significant changes like the National Security Law (NSL)The National Security Law went into effect in Hong Kong on June 30, 2020. It is intended to “prevent, stop and punish” everything that the Chinese government believes could threaten national security. Due to the vaguely worded text of the law, it has caused great uncertainty among the population since its implementation. don’t happen every day, on most days, thinking about politics means thinking about the things happening in Tuen Mun, the district he represents.

That is especially true for Sam, who, as a member of the “Tuen Mun Community Network”, is part of the localist faction within the pro-democratic camp. Localists want to preserve the city’s independence. They don’t see themselves as Chinese but base their identity on the city and district they live in. For Sam’s politics, this often means taking care of the little everyday things in Tuen Mun.

Hey Sam, how is your day going? Is the council meeting still going on?

Supposedly we would have a mid-autumn event

The Mid-Autumn Festival or Moon Festival is an important traditional festival celebrated throughout South East Asia during the harvest season. It is held every year around the end of September and the beginning of October when there is a full moon. Historically, worshipping the moon was supposed to bring a bigger harvest. Today it is mostly an opportunity for Hongkongers to get together with friends and family. 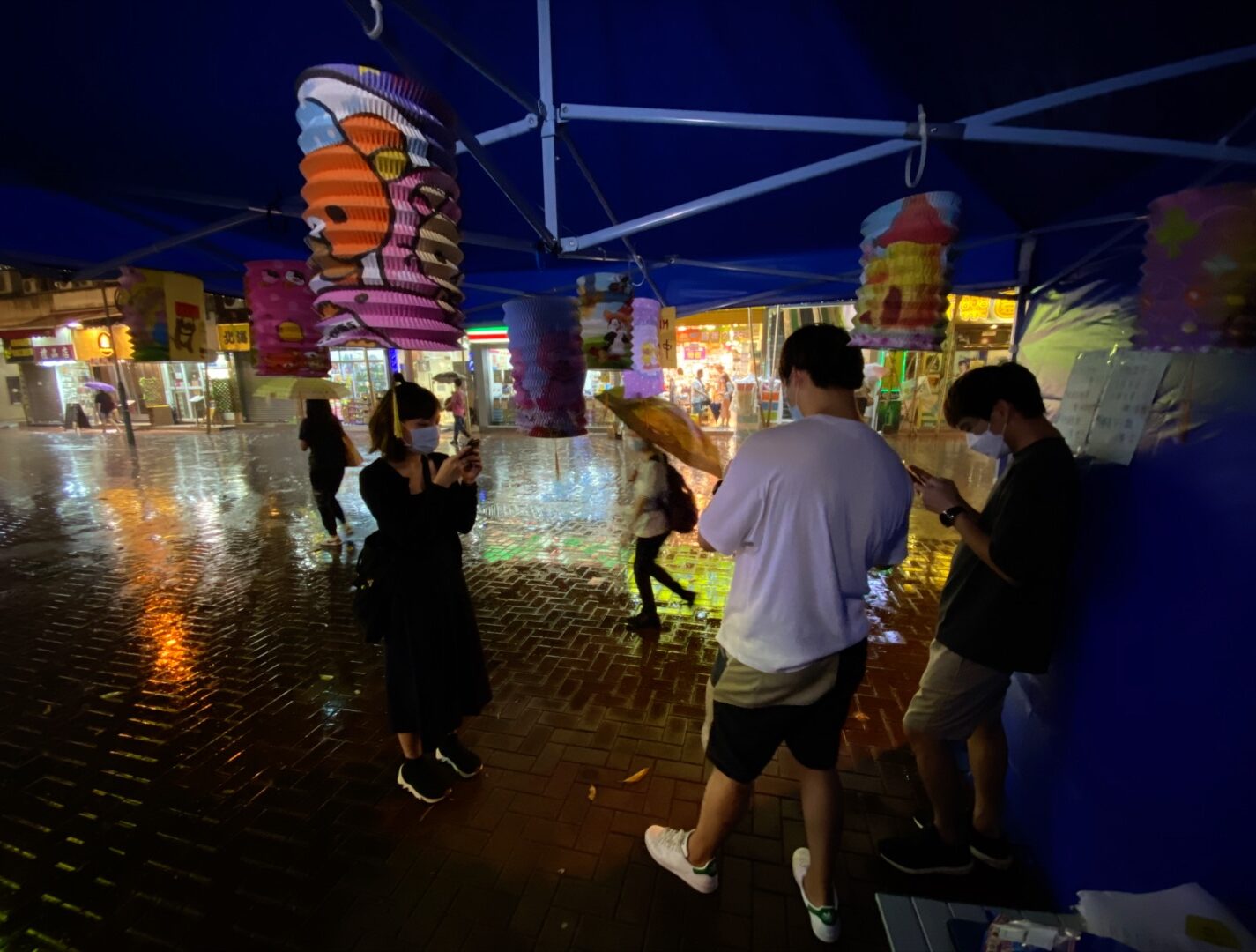 We have to stop everything and back to our office now

On this day, 71 years ago, the People’s Republic of China was founded. Instead of celebrating this national holiday, Hongkongers in recent years have been on the streets, protesting the growing influence of the regime in Beijing and demanding liberty. Under the National Security Law (NSL)The National Security Law went into effect in Hong Kong on June 30, 2020. It is intended to “prevent, stop and punish” everything that the Chinese government believes could threaten national security. Due to the vaguely worded text of the law, it has caused great uncertainty among the population since its implementation. these protests are considered as riots and the police acts accordingly. Today, 87 people will be arrested, including four district counsellors. One of them is Sam’s friend.

After the National DayThe People’s Republic of China was founded on October 1, 1949. Since then this date is considered a national holiday. demonstrations, Sam goes on a long vacation to relax and celebrate his wife’s birthday. On Monday, he briefly returns to the District Council to talk about an issue the government would prefer him and his colleagues not to address: accusations of human rights abuses in the Castle Peak Bay Immigration Centre in Tuen Mun, Hong Kong’s largest prison for immigrants. More than a dozen inmates claim they are being held there indefinitely without ever seeing an immigration officer. Some even report that they have been beaten. All of them have been on a hunger strike for three months.

The District Council has invited several government officials to talk about this issue, but the officials just walk out of the room.

Hey Sam, what are you doing today?

What’s on the table there?

We are discussing something, the government doesn’t want us to say

And we are blocking them from leaving

The next day Sam explains to us how significant this political blockade is.

But for today, Sam reveals another bombshell to us.

Wow, someone tried to hack you?

Me getting email from electorate

Chinese Communist Party: WE got it.

So did they crack it?

No they haven’t cracked it yet

Do you feel threatened by the communists?

Emmmm not so much

But worried about affecting other people

In a message Sam sends us the next day he tells us that ever since becoming an activist he has been trying to protect his data in all kinds of ways. These range from using a VPN to fitting his laptop screen with a tinted privacy filter, preventing others from looking at his screen. But he seems to have taken the hacking attack with a pinch of humour:

In Hong Kong we often say that the government did this, because they respect you. Otherwise, no one would give a fuck about you and no one would try to hack your email. If they do that, it means you’re valuable and that you’re somebody.

For the remainder of the week Sam mostly stays at a hotel or at home, spending time with his wife and family. While he has time for some peace and quiet, we ask him if there is something he’d like to tell the audience. Here is his reply.

The chat messages have been curated by us and shortened for better readability while the context of the messages has been retained.